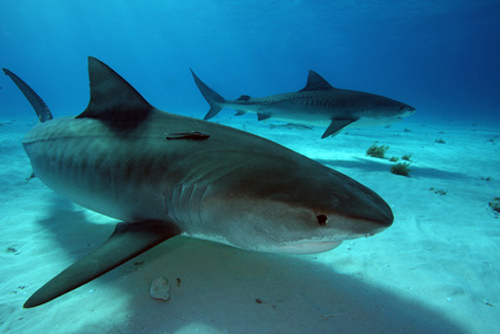 Shark antibodies are said to be unique in the animal kingdom, having the smallest known binding domains. [© Andrew Reid - Fotolia.com]

Sharknado and other popular shark movies aside, a unique type of antibody molecule from this ancient species is providing insights into the evolution of the adaptive immune system. These antibodies may provide an entirely novel class of potential antibody research tools and therapeutics based on their unique structure, binding properties, size, and robustness.

Highlighting burgeoning interest in single-domain antibodies was the announcement last February that a research team at the University of Aberdeen received £1.5 million (around $2.35 million) in funding to develop cancer and anti-inflammatory drugs based on the immune systems of sharks. Scottish Enterprise and the Biotechnology Sciences Research Council made the award.

The Aberdeen group says that it has produced more than 10 billion variable novel antigen receptors (VNARs) that are found in the shark immune system, and that their drug library is “equivalent to having access to 10,000 sharks without needing to keep a single animal in an aquarium.” This leaves sharks safe from scientists and at liberty to become movie stars.

The original discovery of these unusual antibodies was published in Nature in 1993, emerging from a project on how dromedary camels (the one-humped Arabian kind) and water buffalo keep parasitic infections at bay. In a classic example of chance favoring prepared minds, the researchers observed that antibody tests in the camel blood revealed the presence of simpler antibodies composed of only heavy chains. From a functional standpoint, these antibodies that seemed to lack completely an antigen binding site could bind to target antigens as firmly as normal antibodies, despite having only half as many complementarity-determining regions (CDRs). And unlike Fabs, the heavy-chain-only antibodies do not stick to one another.

Despite the lack of light chains, the investigators noted that the odd antibodies “nevertheless have an extensive antigen-binding repertoire, a finding that calls into question the role of light chains in the camel. Camel heavy-chain IgGs lack CH1, which in one IgG class might be structurally replaced by an extended hinge. Heavy-chain IgGs are a feature of all camelids. These findings open new perspectives in the engineering of antibodies.”

Some features of these antibodies that provoke interest in their use as diagnostic reagents and therapeutic drugs include their small size, high solubility, thermal stability, refolding capacity, and good tissue penetration in vivo. In terms of size, for example, conventional antibodies have a molecular mass of about 150 kDa, while smaller recombinant antibodies have a mass range of about 25–50 kDa. Shark, camel, and llama antibodies, on the other hand, weigh in at 12–13 kDa, or about half the mass of smaller recombinant antibodies and less than a tenth of conventional antibodies. At these small sizes, scientists point out, the antibodies can penetrate further into tissues and tumors.

The antigen-binding site of these heavy-chain antibodies (hcAbs) is designated VNAR in shark hcAbs and VHH in camelid hcAbs. These domains can be and have been produced as recombinant proteins, or single-domain antibodies (sdAbs).

Identification of these molecules as potential diagnostics, research reagents, and therapeutics immediately triggered commercial attention, as Haptogen licensed the rights for the antibody technology developed at the University of Aberdeen and was using shark antibodies to create new therapies for delivering drugs to combat key diseases such as cancer. Wyeth acquired the Scottish biotechnology company in 2007, prior to its own acquisition by Pfizer.

Caroline Barelle, Ph.D., head of shark antibody development at Aberdeen, explained that the shark antibodies are unique in the animal kingdom, having the smallest known binding domains. “We capture this repertoire of antibody domains and screen them for activity against specific disease targets,” she said.

“We can immunize sharks and smaller species like dogfish that are still cartilaginous fish but are easier to handle [than larger sharks].” The animals respond to vaccination and produce high affinity domains in response. “Based on our experience and knowledge of the antibody structure, we have also built a synthetic library of about 100 billion shark antibodies using phage display, and can express VNAR domains in both bacterial and mammalian expression systems.”

Dr. Barelle further notes, “One of the amazing things about these antibodies is how soluble and robust they are. Over 400 million years of evolution they have evolved into highly stable proteins.” And, she added, shark antibodies “don’t have the limitations of other single-domain antibodies,” noting that the shark antibodies are about 20% smaller than camel antibodies and 30% smaller than human single-domain technologies. “We can generate more diverse binding site structures allowing us to access cryptic epitopes.”

Dr. Barelle further explained that different shark species express different VNAR types that contain varying numbers of intramolecular bridges creating a repertoire of structurally diverse domains. These include types with “protruding” loops that are conducive to binding pockets or grooves as well as types with flexible, non-constrained loops, which together broaden the range of antigens that VNARs can target.

Andy Porter, Ph.D., professor of biotechnology at the University of Aberdeen and director of the Scottish Biologics Facility, said that the first products will likely be “biotool” molecules, such as albumin-linked VNARs that can extend the half-lives of other proteins, but looks forward to introducing candidate products that use shark technologies for oncology and inflammation applications.

But unlike organizations that produce antibodies based on camel VHH domains or human antibody fragments, the University of Aberdeen is sticking with sharks. These efficient antibody-generating factories come in manageable sizes and are free and easily obtainable off the coast of Scotland.

We have 109 researchers online