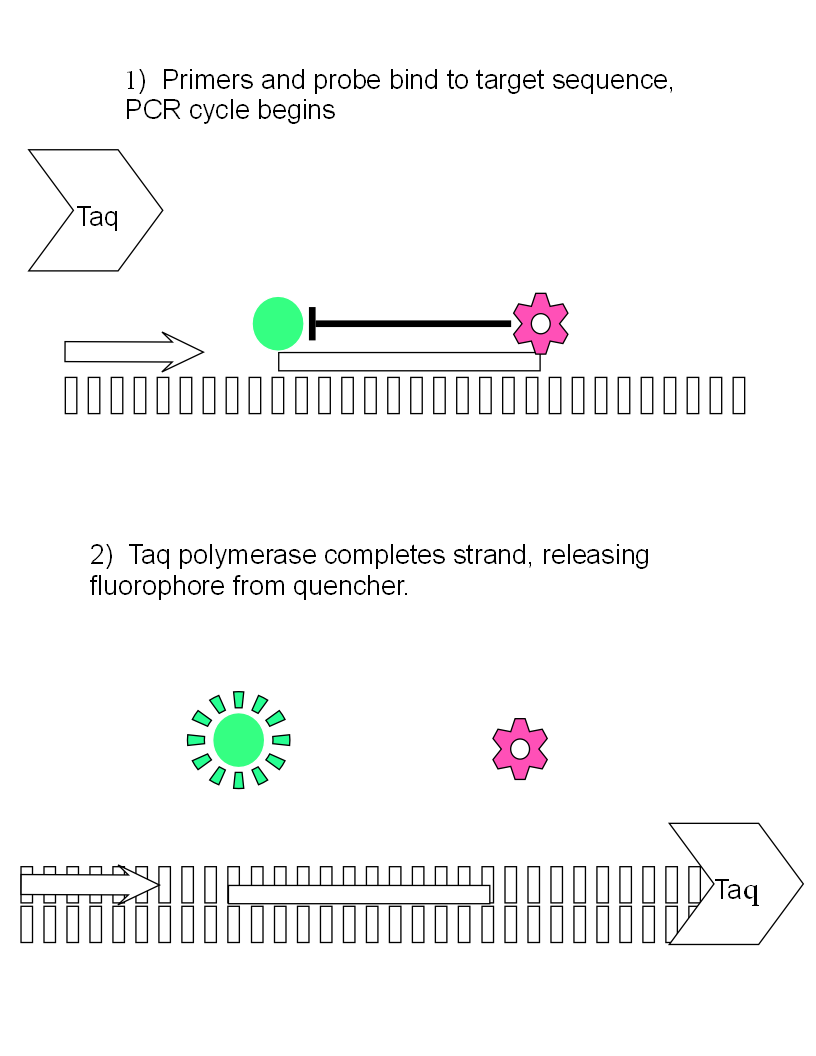 eal time polymerase chain reaction (RT-PCR), also known as Quantitative PCR (qPCR) is a laboratory technique for detecting, amplifying, and quantifying a specific nucleic acid sequence. There are two methods of detection. In the first method, a dye is added to a standard PCR reaction that fluoresces only when bound to double-stranded DNA. The detection system counts the number of cycles at which the double-stranded product reaches the critical threshold at which the fluorescence can be detected. This is a simple technique, but the disadvantage is that the dye can bind to any double-stranded product, which may give inaccurate results if the primers bind to alternative sequences.

The second method consists of PCR using the standard forward and reverse PCR primers, and a third primer-probe that binds to a sequence in between the other two. This primer has a fluorescent probe attached to the 5’ end, and a quenching agent attached to the 3’ end. No signal is produced from the probe due to the proximity of the quenching agent to the fluorophore. However, when the probe binds to its target sequence during PCR, the 5'-3'-exonuclease activity of the Taq polymerase will release both fluorophore and quencher, resulting in a fluorescent signal. The real-time PCR detection system measures the Cycle Threshold (Ct) at which there is sufficient fluorescence to be detected.

Each kit contains a ready-to-use primer/probe mix consisting of forward and reverse primers combined with a FAM/BHQ-labeled probe specific for the target sequence. This dual-labeled probe is supplied with PCR primers at 20x concentration and may be used with standard real-time PCR reagents.

For absolute copy number calculations, a tube of standards is also included containing the target sequence. These standards may be diluted to create a standard curve.

We have 230 researchers online